The town of Zharkent, or Yerkent in the Uyghur pronunciation, lies in southeast Kazakhstan, near the Chinese border crossing and trading centre of Khorgas. It is an important centre for Uyghurs, many of whom arrived from the neighbouring Ghulja region of the Uyghur homeland (Xinjiang) in the late 1950s.

The Yerkent meshrep is part of a major revival in Kazakhstan which began in 2009. Led by the Ethno-Cultural Centre of Uyghurs of the Republic of Kazakhstan, the revival aims to sustain Uyghur culture, language and identity. The new meshrep are also intended to play an educational role. Rehimjan, leader (meshrep bégi) of the Yerkent meshrep, commented:

If you meet ten people on the street, and one of them attends a meshrep, his way of acting will be very different from the others; he stands up for the community, he stands against inappropriate behaviour … Meshrep teach customs, rules, and life experience. There are lots of punishments. They watch them, they learn from that, and they know the difference between black and white. The difference between those who’ve seen meshrep and those who haven’t is like mountains and gardens.

The new meshrep are intended to be a mechanism of self-governance, a tool for mobilisation, and a way for people to resolve social issues. According to Rehimjan:

There would be no meaning in the meshrep if it didn’t get involved with helping the poor and such issues. The purpose of the meshrep is to share the problems of our town. If you are a member, you have to offer financial support …. For many years we’ve been helping people who are struggling. … Our members go on the front line to keep things clean and peaceful in our home town.

In August 2019, aroundsixty local men – the “thirty boys” (ottuz oghul) meshrep members, plus distinguished guests from Almaty, attended a meeting of the Yerkent meshrep. They sit at a long line of tables in a shady clearing outside Yerkent. The meshrep lasts for three hours, and is divided into four precisely timed sections.

The pashshap beg, law enforcer of the meshrep, holds a wooden rod (gültayaq). He cracks the rod to signal the start of the first section, which is for music and dance. The music begins with Chebiyat Muqam, one of the most popular of the classical Uyghur Twelve Muqam repertoire. It is a powerful performance led by the town’s most respected musicians, the Yerkent Bulbuliri (Nightingales of Yerkent). The music is accompanied by dancing by the meshrep members:

After the music comes to an end, the dancers sit down and the soup is served, prepared under the direction of the köl bégi. Within the meshrep, communal eating of national dishes is also a site of key cultural importance, and meshrep members must observe traditional etiquette when they eat: never take food from the centre of the dish; always use the right hand.

Joking and laughing is an important part of the meshrep. Ili men have a famous distinctive style of laughing which is sometimes compared to the braying of a herd of goats. Members stand to tell comic stories, and other members follow up with comments, in a fast exchange of linguistic skill and cultural competence. As members enjoy the music, dancing, and joking, the meshrep is “brought to the boil.” This excitement and fun, this “social heat,” is crucial in forging the communal bonds which make the meshrep an effective tool for social mobilisation.

The second part of the meshrep begins with two songs: Ösäk Sadasi (Song of the Woodland) and Karwan Naxshisi (Caravan Song). They contain powerful memories of journeys across borders, and the places of the homeland left behind. Ösäk Sadasiis the anthem of the Yerkent Meshrep. It remembers the journey of a group of Uyghurs who crossed the border in the early 1960s and camped in the woodlands outside Yerkent for weeks until the Soviet authorities rehoused them.

Play your rawab and satar for the muqam of Yerkent
Let’s entertain ourselves, friends, with the songs of Yerkent
There’s woodland beside the Yerkent road, let’s go and see
Friends, let’s embrace each other in the woodland

The Caravan Song evokes more distant journeys through the Telke mountain range which lies southeast of Ghulja; a place that many of these men have never seen. For Uyghurs in Kazakhstan this song references deep historical memories of place. It is a powerful symbol of Uyghur identity.

Green pine and spruce trees, in the Telke mountain pass
The Caravan Song rings out in the land of the free

They say of the Telke mountains, I will never have enough of their beauty
Singing my song I came, to that beautiful mountain pass

New members can join the meshrep only if they are introduced by existing members and approved by the thirty boys. If appropriate, their introduction involves a display of their talent. At this meshrep, Adiljan, leader of the Yerkent Bulbuliri, introduces his son to the meshrep. Even though he studied at Russian school, the boy is a fine singer of Uyghur songs:

The third section of the meshrep is for the court. Rehimjan explains, “Just as Kazakhstan has its constitution, just like Islam has sharia law, our meshrep has rules too.” The qazi (judge) records all the “crimes” – talking during the music or smoking at table – committed by meshrep members during the gathering.

He reads out each charge, and other meshrep members rise to support or oppose it. This is a play of collective decision-making, and an exercise in public speaking. It is believed to be central to the educational value of the meshrep.

The meshrep court also provides a space where tensions within Uyghur society can be collectively negotiated. One ever-present question at the meshrepwas the tension between the need to respect religion, and the desire to have fun. Meshrep leaders must carefully negotiate these conflicting demands. Rehimjan was careful to provide an inclusive space for all:

They conclude the meshrep with a prayer: “Great Allah, grant our people peace.” The message is clear: nation and religion together, at the heart of the meshrep. 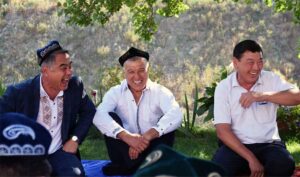